Airway analysis is the clinical application of cephalometric which is the process of analyzing the patient's dental and skeletal relationship. I-Cat and 3D X-rays can also be taken which provide precise information about the dentin and the anatomy of the nose which helps to improve the patient’s health. They are used to study the bone, soft tissues, facial abnormalities, and other problems as well. These methods of analysis are used by dentists, maxillofacial surgeons, and orthodontists too. Patients can view their own airway anatomy with the help of 3D imaging which allows them to understand what is wrong and how the treatment works.

Sleep apnea is a breathing disorder epidemic in the United States.  In 2017, the American Dental Association published a policy statement titled The Role of Dentistry in the Treatment of Sleep-Related Breathing Disorders.  This statement encourages dentists to (1) screen all patients for sleep-related breathing disorders (SRBDs) and (2) if the risk for SRBD is determined, refer patients to the appropriate physicians for proper diagnosis.  (Please follow this link to read the full statement: 2017 ADA Policy Statement)

As an orthodontic office with iCAT 3-D imaging technology, Phelps and Cohen Orthodontics is uniquely equipped to screen for airway obstruction on all patients and to tailor orthodontic treatment to improve breathing when applicable, for both children and adults.  So we have made a commitment to follow the ADA Policy Statement and screen all patients for SRBDs.  We screen both the nasal and pharyngeal airways and per the Policy Statement, we make the appropriate referrals if indicated which may include a referral to an otolaryngologist (ear/nose/throat or ENT specialist) and/or a sleep physician.

Below are some examples of anatomical airway concerns we routinely identify on iCAT 3-D imaging.  (Please follow this link to learn more about iCAT 3-D Imaging) 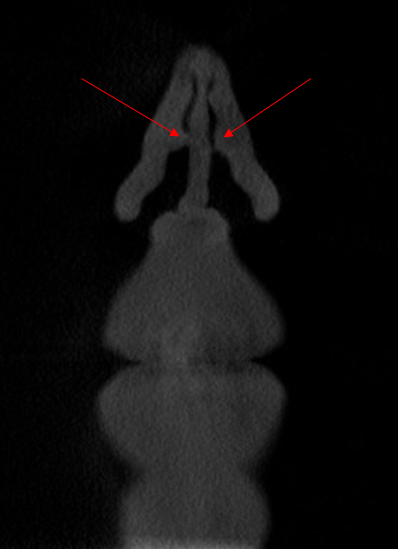 1)  Nasal Valve Compromise (or Stenosis):  The arrows point to where the lateral walls of the nose are collapsed in and touching the cartilaginous septum of the anterior aspect of the nose.  This narrowing of the nasal valve can increase resistance to nasal airflow. 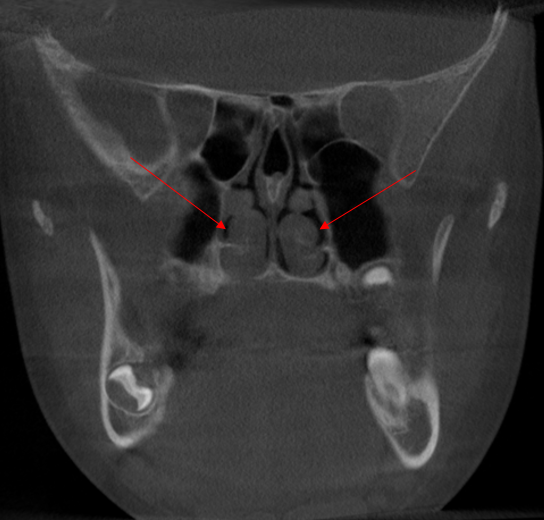 2)  Enlarged Turbinates or Turbinate Hypertrophy: The arrows in the above image are pointing to the inferior turbinates near the back of the nasal airway.  Enlarged turbinates can contribute to severe headaches and sleep disorder such as snoring and obstructive sleep apnea. 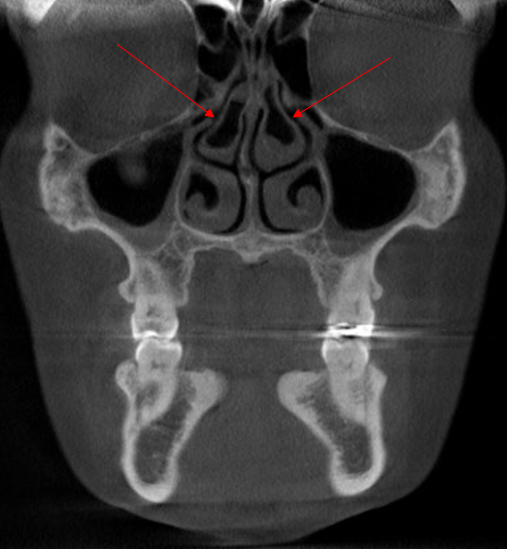 3)  Conchae Bullosa: Concha Bullosa is also known as the middle turbinate. The arrows depict areas of the nasal cavity where the air pockets in the middle, turbinate. 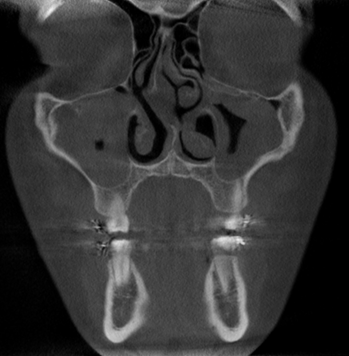 4)   Deviated Septum: We suspected this patient had a deviated septum so we referred to an ENT for diagnosis and treatment.  Maxillary chronic sinusitis is also noted in this image. 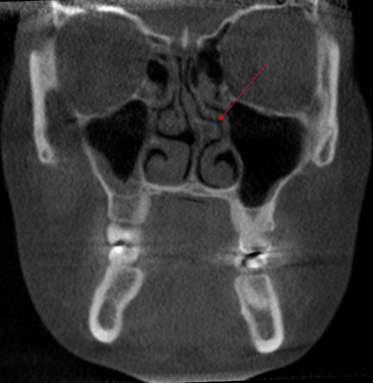 5)  Septal Bone Spur:  A septal bone spur can cause significant airway obstruction and lead to turbulent nasal air flow and upper airway resistance.  This patient was referred to an ENT for diagnosis and treatment. 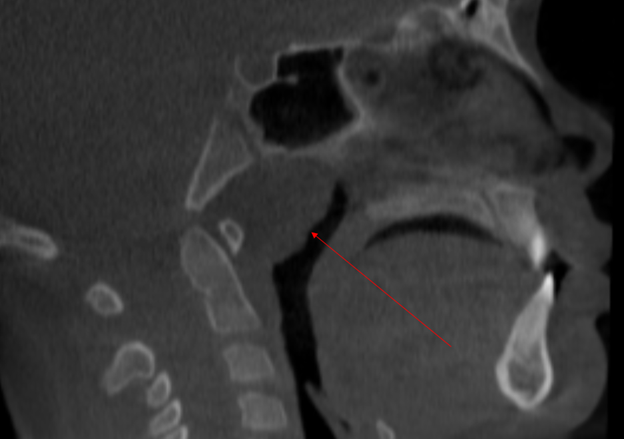 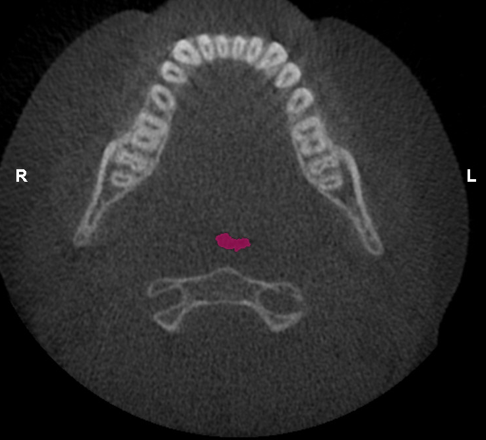 7)  Enlarged Tonsils: In this axial view, it is apparent that the tonsils are encroaching on the narrow airway from both the right and left sides. 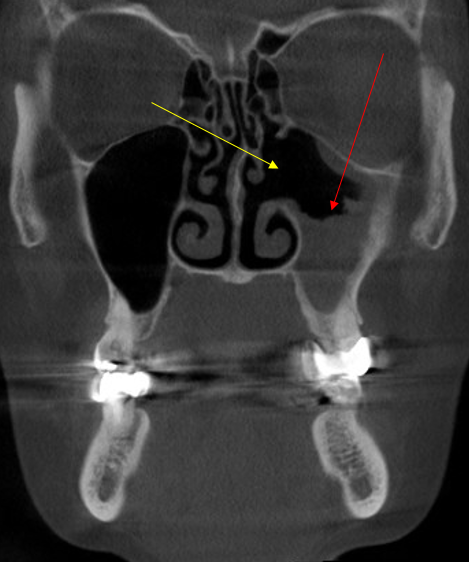 8)  Chronic Sinusitis:The red arrow points to an area of chronic sinusitis.  The yellow arrow points to a missing section of the maxillary sinus wall that was removed during a procedure called an antrostomy.

Figure 1:  This is an axial view of an extremely narrow pharyngeal airway with an MCA of 10 mm2.  Due to the severely narrow airway and a medical history that included chronic orofacial pain, this patient was referred for a sleep study and diagnosed by a sleep physician with severe sleep apnea. 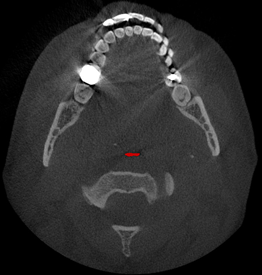 Figure 2:  This is a sagittal view of a large pharyngeal airway with an MCA of roughly 400 mm2.  This patient would be considered at low risk of an SBRD related to airway collapse.  However, a complete screening includes checking for other signs and symptoms of airway obstruction. 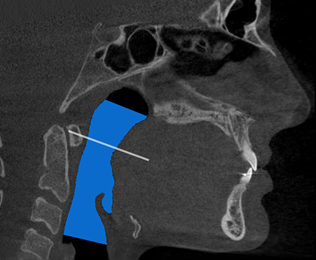 Your appointment has been successfully booked.